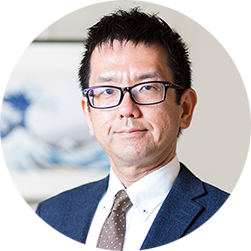 The Fourth CEO of Iwashitashoten, established in the early Showa period.

After graduating from college, Mr. Iwashita worked in distribution first and then took over his family’s business, Iwashitashoten,
At that time, although bibliographic database was not developed and incurred fees, he introduced it to his stores and IT early to assist customers in selecting books as he strove for the “Customers first policy.”

Later, he made his stores vison around the concept of “a book store which is discovering local potential.” He started introducing the local books mainly in Kanazawa Ward in the City of Yokohama and established a publishing department. The project has released many bestsellers, such as “Panorama view of Kanazawa Bunko” and “Kanazawa Ward Useful Guide.” The Yomiuri Shinbun, a major newspaper in Japan, and other mass media introduced these publications.

During the promotion activities, he was impressed with Ukiyo-e, the origin of the Japanese commercial publishing. He opened “Ukiyo-e Japan,” an online store, and started operations.
Currently, he is actively working on hybridization of publishing industry integrating the origin of publishing and advanced web interface.

My favorite piece is “Mt. Fuji from Goten-yama Mountain, at Shinagawa on the Tokaido” (Thirty-Six Views of Mt. Fuji). I love this one because I can find abundant cherry trees in bloom stretching across the entire composition, wide-open scenery, and the indescribable expression of the people enjoying themselves in the scene.