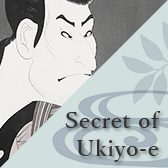 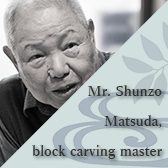 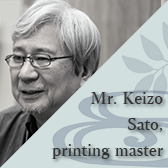 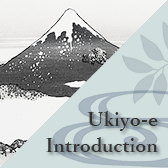 It is said that the beginning of Ukiyo-e was after Edo Great Fire, that occurred in January 1657 (Meireki 3).
The fire burnt out the entire town and nothing was left. After that, illustrating and depicting the rebirth trend with Edo city was the origin of Ukiyo-e.

“Ukiyo” is spelled out “gloomy world” in kanji, (Chinese characters), literally. As the kanji characters represent the original word, it means the gloomy world.
On the other hand, under the reconstruction atmosphere, because of such a difficult time, people started to think to enjoy life and have fun. In short, Ukiyo-e, whose meaning changed to mean “the illustration of the floating world,” was the entertainment for general people who enjoy living in the time and seeing the world positively. In that sense, Ukiyo-e depicted various genres, such as prostitutes in Yoshiwara, Kabuki actors, beautiful women in town, sumo wrestlers, firefighters, landscapes, and stories.

Landscape
Shining with the activities of Katsushika Hokusai and Utagawa Hiroshige, landscape established its existence from the sub-genre to a major genre. Landscapes played a role in guidebooks that we have now.

Drawing of Actors
These are works depicting popular Kabuki actors. It is also an important genre of Ukiyo-e in addition to pictures of beautiful women. The numbers produced were more than half of the Ukiyo-e production.

Pictures of Beautiful Women
The prostitutes of Yoshiwara and Geisha, female entertainers, were drawn the most. Young girls in town and mothers were illustrated also. They became also the subjects gradually. They tell the people’s daily life.

Impact outside of Japan
There is a story that Bracquemond, a French painter, was surprised with the pottery’s wrapping paper sent from Japan when he was looking at the paper unintentionally. “Hokusai manga” (Sketching) was there. Since then, Bracqemond was inspired by Hokusai’s drawing, and he passed them to his painter friends at every single occasion. It became a catalysis of the boom that was called “Japonism,” an art trend that started in Europe.

“The Great Wave off Kanagawa” in “Thirty-Six Views of Mt. Fuji”