Our Ukiyo-e debut on TV show!!

Setting the location at Tsukudajima, Tokyo, two played a pair of detectives: an experienced detective Takarai Shingan, acted by Kataoka Tsurutaro and young detective Izugawa Makoto, acted by Kakei Miwako. The drama depicted mostly about “Phony Beauty”, a scroll tapestry called as the national treasure class. The story was developed to a thrilling and heart racing, and enjoyable drama.

Well, talking about our when Ukiyo-e products appeared in the drama. At the opening, it showed up, and it was so closed up.

Katsushika Hokusai “Buyo Tsukuda-jima”
Although I heard they would use at the opening, I was very excited how they used our products so cool: “Buyo Tsukudajima” apprered in the full-screen and pulled back gradually, and then the actual scenery of Tsukudajima appeared. 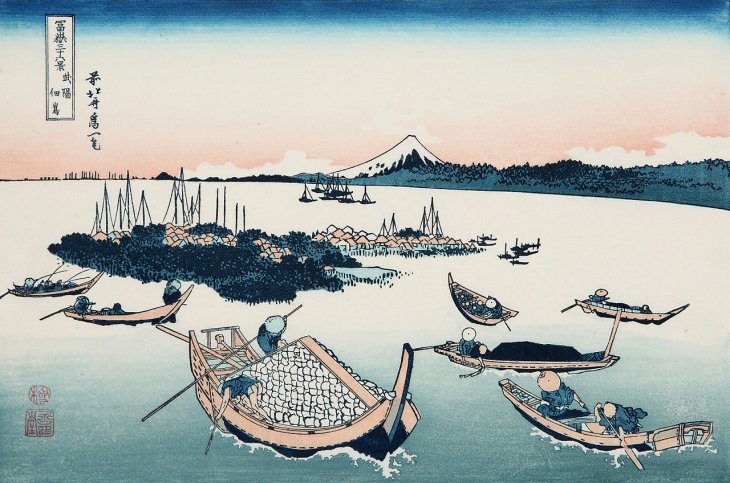 Also, in Kunihiro Tomiyuki’s room, acted as a Professor of Art College, several our Ukiyo-e prioducts were hang.
Here are these three items.

Kitagawa Utamaro “Twelve Hours in the Pleasure Quarter: at Eight at Night “

Since Ukiyo-e is beautiful for its vivid colors, “Even if they are small, they have an existence and they are appealing”. I was satisfied by myself.
I was so glad they used Ukiyo-e in this way.
Definitely I expect the re-running!!